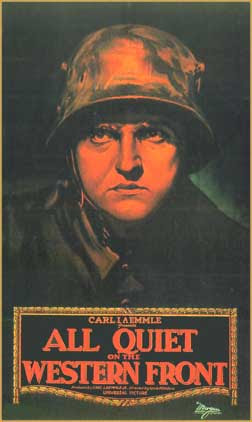 In the period directly following The Great War, anti-German sentiment was common in American cinema.Bold lines were drawn between good and evil, and the war was seen as a just fight between the brave Allied forces and sneaky, blood-lusting Germans. These films appealed to the emotions of the audience rather than their intellect, they were propaganda because they only revealed the Allied side. However in 1930, Lewis Milestone's All Quiet on the Western Front, a film based on the novel by Erich Maria, depicted the story of a German unit on the French front, losing soldier after soldier to things like illness and cave-ins. This film showed German boys who could just as easily been American in looks and habits, and thus begged this question: "Why should American boys be fighting boys from across the world who are just like them?" This film portrayed the battleground as a place of misery and fear rather than one of triumph and bravery, and stands out as one of the most important anti-war films of its time.


Dr. Strangelove or: How I Learned to Stop Worrying and Love the Bomb (1964)
Starring: Peter Sellers
Director: Stanley Kubrick 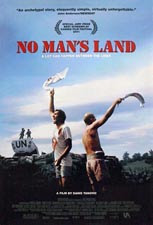